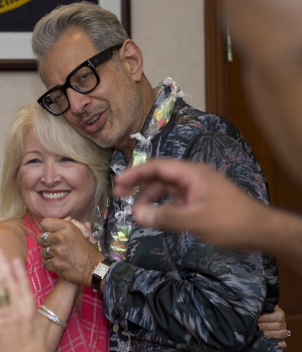 Jeffrey Lynn Goldblum is an American actor and musician. He has starred in some of the highest-grossing films of his era, such as Jurassic Park (1993) and Independence Day (1996), as well as their respective sequels, The Lost World: Jurassic Park (1997) and Jurassic World: Fallen Kingdom (2018), and Independence Day: Resurgence (2016). Goldblum also starred in films including Invasion of the Body Snatchers (1978), The Big Chill (1983), and Into the Night (1985), before coming to wider attention as Seth Brundle in David Cronenberg's The Fly (1986), which earned him a Saturn Award for Best Actor. His other films include The Adventures of Buckaroo Banzai Across the 8th Dimension (1984), The Tall Guy (1989), Deep Cover (1992), Powder (1995), The Prince of Egypt (1998), Cats & Dogs (2001), Igby Goes Down (2002), The Life Aquatic with Steve Zissou (2004), Adam Resurrected (2008), Le Week-End (2013), The Grand Budapest Hotel (2014), and Thor: Ragnarok (2017). Goldblum has also starred in several TV series, including the eighth and ninth seasons of Law & Order: Criminal Intent as Zack Nichols. He directed the short film Little Surprises, which was nominated for the Academy Award for Best Live Action Short Film. His jazz band, Jeff Goldblum and the Mildred Snitzer Orchestra, released their first album, The Capitol Studios Sessions, in 2018. (cc-by-sa wikipedia)