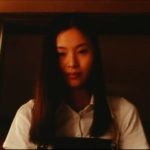 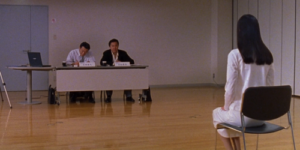 I love horror films with a slow, patient build. Audition is the best at this I’ve ever seen. It follows the same basic pattern as Hitchcock’s The Birds. The first 90 minutes of a film with a 115-minute running time plays like an elegiac romance. Aoyama is a lonely widower. His son and best friend both urge him to remarry. Both the setup and the melancholy reminded me more than a bit of Ozu’s Late Spring. We don’t approve of Aoyama’s plan to hold an “audition” for a fake movie in order to find a bride. Or the way he falls for Asami so quickly. But he seems so lonely that we forgive him.

We also overlook the misogynist winks he gives his son when he brings home a pretty girl. These would be a tip off in any other film. But we like Aoyama, and director Takashi Miike has set such a dull mood that we allow these gestures to pass. 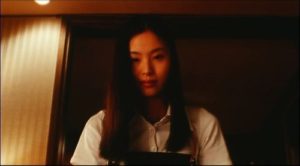 But we can’t overlook whatever is in the bag at the audition winner’s home. Miike leaves a few clues about what is to come — just as Hitchcock added in a few small bird attacks to whet our appetite while the main horror is still on slow boil.

These two paths — Aoyama’s quiet misogyny and the hints of Asami’s violence — converge for the final 20 minutes of the film. No spoilers here. But be warned that this is an awful date movie.