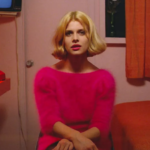 The color scheme introduced in the beginning of the film is magnificent. It uses the harsh browns and blues as Lawrence of Arabia, but adds a bold red to give it a surreal, almost pop look. The palette is bold enough to call our conscious attention to it. We are introduced to Travis as a drifter who is entirely inside himself, and has trouble even interacting with another human being.

The reds continue to dominate through the early stages of the film. Although Travis is in the city, he is still emotionally and morally alone in the desert. Travis selfishly takes his son away from his family in order to find the boy’s mother – Travis’s estranged wife.

The colors shift to cool blues and greens whenever Travis shows genuine concern or love for his son and his family. Here, he has the boy call home so they won’t worry.

But, Paris, Texas, soon turns back to the reds and browns of the desert. Travis uses the boy to stalk his wife and finds her working at a peep show. The colors reflect the isolation of both characters. Their fantasy worlds must be bold in order to cover up their real brokenness.

Travis’s moral epiphany turns the screen permanently to green and blue. He sets aside his jealousy and possessiveness, and does what’s best for those he loves. We end the film the way we began – with Travis alone – but in a very different world.