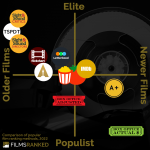 What are the greatest movies of all time? Well, the answer depends on who’s making the list.

I examined lists from some of the most popular movie-ranking websites and tallied the films they share with each other. I used this data to grade the lists on the elite taste – populist taste dimension.

The Sight & Sound Critics’ Poll and the Actual Box Office numbers don’t share a single movie in their Top 100. That’s not a surprise. What might be a surprise is that there’s little difference between the critics and users on Rotten Tomatoes, at least as far as the top 100 goes. And the Academy Awards are solidly middlebrow.

They Shoot Pictures, Don’t They
Seeing every movie on the giant 1,000-film large canon has become a lifelong goal of many a film buff. It is an aggregate of hundreds of other lists weighted by prestige. It has the earliest average year of any list I examined.
ELITE SCORE: 90/100
AVERAGE YEAR: 1960

Sight & Sound Directors’ Poll
The directors’ counterpart to the magazine’s critics poll. The list is somewhat similar to the critics’ poll but diverges at certain points.
ELITE SCORE: 86/100
AVERAGE YEAR: 1963

IMDb User Scores
The Internet Movie Database is *the* film database on the web. Its ‘Top 250’ is easily the most famous fan-made canon of the internet age.
ELITE SCORE: 59/100
AVERAGE YEAR: 1988

Academy Awards for Best Picture
The most famous movie award in the business is alternately accused of being too snobby or pandering to the masses. In reality, few of their Best Picture picks are beloved by either group.
ELITE SCORE: 52/100
AVERAGE YEAR: 1973

Rotten Tomatoes Tomatometer
The site will call a film ‘Certified Fresh’ if 75% or more of film reviews give it an above-average score. A go-to for people looking to buy tickets to new movies.
ELITE SCORE: 50/100
AVERAGE YEAR: 1989

Rotten Tomatoes Audience Score
Users are also allowed to have their say on Rotten Tomatoes. Surprisingly, the non-professionals liked the elite picks at the same rate the critics did – and they preferred slightly older films.
ELITE SCORE: 50/100
AVERAGE YEAR: 1988

CinemaScore A+ Films
The company surveys viewers as they leave the theater then gives the film a letter grade based on the responses. It’s very popular with studios. Only 92 films have ever earned an A+. Many, but not all, go on to major box office success.
ELITE SCORE: 43/100
AVERAGE YEAR: 2005

All-Time Box Office, Actual Dollars
This list makes the most headlines as studios and distributors brag about the constantly-falling records. I used it as the benchmark for film popularity.
ELITE SCORE: 0/100
AVERAGE YEAR: 2012