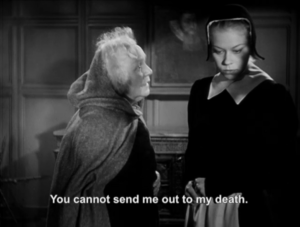 Day of Wrath, a movie about 17th Century women accused and condemned of witchcraft, was made during the Nazi occupation of Denmark, and released just months after the Nazis dissolved the Protectorate Government, announced martial law and began hunting for Danish Jews.

Jonathan Rosenbaum reports that director Carl Theodor Dreyer denied Day of Wrath was a political allegory.  That’s hard to believe.  But intentional or not, Anne hides the old woman accused of witchcraft in the attic from the clerical stormtroopers on screen at the same time the Christian Danes were secretly shipping the Jews overseas.

But there are no “Righteous” in Day of Wrath.  Anne falls in love with her husband’s son, and the two start an affair.  Dreyer portrays Anne in the most sympathetic light he can — their sinning takes place in sunny meadows and they are the only happy scenes in a film primarily composed of dour faces.  But Anne won’t recognize her sin, and she (rather justifiably) wishes her husband dead.

This moral ambiguity adds to the idea that Anne can symbolize Denmark.  At the time of filming, the nation was actively cooperating with the Nazis.  Now that collaboration has been condemned, and rightfully so.  But that collaboration likely saved countless lives, and prevented the Holocaust from spreading north.  Denmark’s deal (collaboration to save Jews) could be allegorized as Anne’s deal (consummation to save witches). 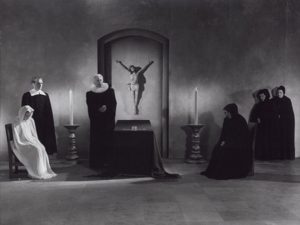 Other references to the occupation can be found in the rumors that the blonde-haired Anne’s mother may have secretly been a witch (read: Jew), and in the torture and “interrogation” of the kangaroo court.  Even here, Dreyer’s condemnation is double-edged: in 1943 the Danish Church protected the Jews.  But the 17th Century setting reminds one that the Nazis did not invent European anti-Semitism, and implicates the church for its sins as well.  The film is inspired by an actual witch trial.  (Michael Haneke’s The White Ribbon likewise explores the roots of Nazism in Europe’s past)

In the end, the Day of Wrath comes for everyone.  The repentant are tortured by their own consciences.  The unrepentant are burned at the stake.