Only 1 film survives from this year.

1893 marks three important milestones in the history of film. First, Thomas Edison opened up the world’s first proper movie studio. Nicknamed the “Black Maria,” it was little more than a shack covered in black tarpaper to prevent unwanted light from entering. Edison was able to rotate the shack, in order to angle the windows towards the sun as it moved throughout the day.

Second, Edison took a step towards monetizing film. He registered Blacksmith Scene and some of Dickson’s other early work for copyright, and exhibited the movies in Brooklyn that summer. He’d start selling tickets in 1894.

Third, Blacksmith Scene marks the first time actors were paid to play a role on film. Previous films had either been experimental, short snippets of real life called “actualities,” or in the case of Pauvre Pierrot, animated. Blacksmith Scene also shows Dickson beginning to consider the aesthetics of what he was capturing on film. You can see he composed the frame into a symmetrical shape, with the figure of the blacksmith in the vest sometime joining the center of the frame to make a cross.

Cinema was starting to grow up into an art form. 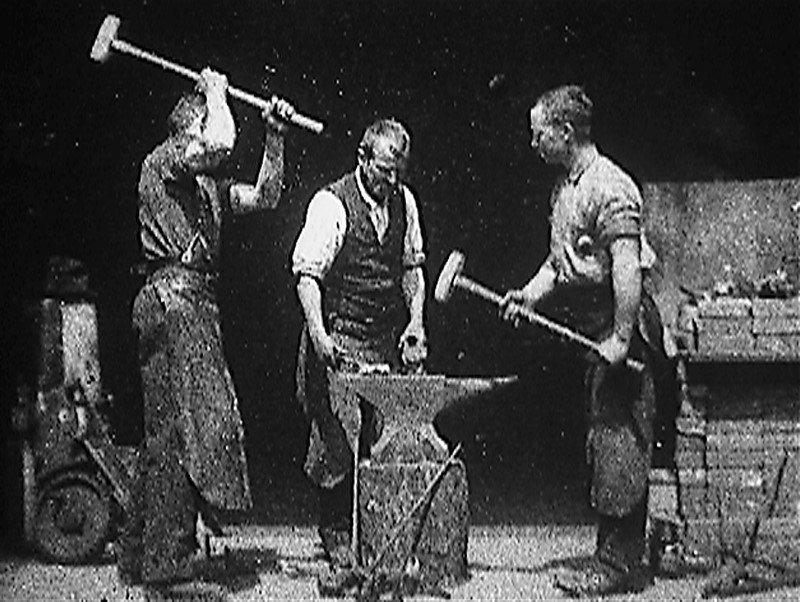