Horror of the Absurd 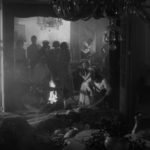 Horror of the Absurd

A bunch of aristocrats get together for a dinner party, and find they cannot leave the room.  There’s nothing stopping them, and they certainly put forth an effort, but, — they just can’t. They quickly descend into savagery and a Lord of the Flies existence.  This is nothing new, especially not for Buñuel, but the utter lack of explanation of their entrapment is what really sets The Exterminating Angel apart.

I prefer absurd horror.  Naturalism and magical realism take all the fun out of it.  I don’t want to take out the DVD and know that if I simply avoid this particular campsite or houses built on ancient Indian burial grounds, I’ll be safe.  I don’t want to know about the troubled childhood of the ghost or the serial killer.  The true horrors are in the unknown, and more so, in the unknowable.

1997’s Cube is a clear descendent of Exterminating Angel.  (Vicenzo Natali’s cited Angel when talking about his upcoming project)  A group of people wake up inside a giant colored cube.  They’re able to use math and science to devise an escape plan, but we never really learn why they’re there in the first place, or who/what created the cube.

La cabina is a short 1972 Spanish film along the same lines – a man enters a phone booth and is trapped.  Why would the company do such a thing?  (view it here; film starts at 9:25 after commentary) 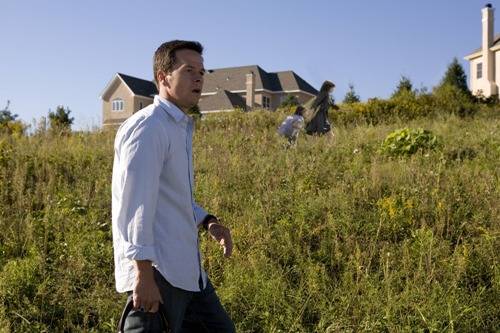 Neither of these match M. Night Shyamalan’s The Happening in terms of irrational horror.  (No, I wasn’t the only one who liked it)   The film takes human arrogance head on.  There are lots of theories bandied about, but no one really has any idea why what happened happened.  Wahlberg and Co. dash around the countryside, randomly running back and forth against an invisible wind, with no real idea of whether the wind was real or not, ala Tarkovsky’s Stalker.

And The Happening‘s end parallels The Exterminating Angel pretty well.

Fernando Meirelles’s Blindness comes to mind, but the end is too cheery. 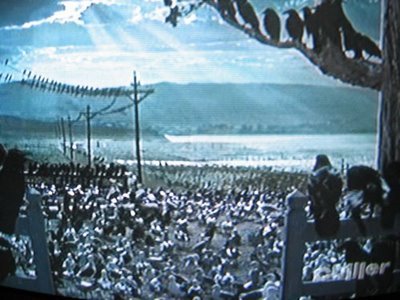 Hitchcock’s The Birds, released just a year after The Exterminating Angel, is my personal favorite horror film, for obvious reasons.

There’s no reason at all for the bird attacks, and that they don’t begin until we’re already well into the movie is genius.  Unlike his other work, there’s no criminal scheme or psychological reason behind the horror.  There’s no consistent pattern, except that they seem to be getting worse.  The attacks don’t seem to be caused by anything natural, and most characters seem to understand that asking “why” is pretty pointless.

200 Greatest Fantasy Films of All Time