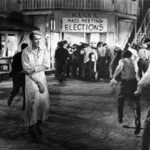 I know those law books mean alot to you, but not out here. Out here a man settles his own problems. – Tom Doniphon

If you let yourself be defeated by them, just because you are too fair to hit back the same way they hit at you, there won’t be any methods *but* Nazi methods! If you preach the Rules of the Game while they use every foul and filthy trick against you, they will laugh at you! – Theo Kretschmar-Schuldorff

Three of the most recent movies I’ve seen explore the need to go beyond the law in order to protect it.  Two John Ford films and one Michael Powell flick ask the question – the bad guys don’t play nice, so why should the good guys? The Man Who Shot Liberty Valance sets up the morality play the way countless other Westerns have.  James Stewart is an idealistic young lawyer, ready to bring law and order to the town of Shinbone.  Shinbone’s marshal is the comic relief, played by Andy Devine.  The only protection the villagers have against the murdering thief Liberty Valance (Lee Marvin) is Tom Doniphon, played by John Wayne.

Stewart starts teaching classes on the law and the constitution.  (Perhaps ironically, he has a picture of Abraham Lincoln hung in his classroom – the most famous example of destroying the constitution in order to save it.)  But he can’t convince anyone to arrest Valance.  Wayne teaches Stewart how to shoot, and *spoiler alert* Liberty Valance gets shot.  Civilization’s foundation is ultimately lawless men like Wayne.

My Darling Clementine tells essentially the same story, with Henry Fonda stepping in for Stewart and Doc Holliday as the town’s outlaw protector.  Both Westerns are excellent viewing.  I used to always want to be Doc Holliday when we played cowboys as kids. The Life and Death of Colonel Blimp was made in 1943, one of a number of British war films made in the midst of it.  It opens with a war game being played by the Home Guard – Major General Wynne-Candy is an old man who organizes the game, announcing that “war begins at midnight!”  A young officer on the opposing side decides to make the game “real” and teach Wynne-Candy a lesson.  He breaks the rules, starts the game 6 hours early, and takes Wynne-Candy prisoner in the bath.

Through a series of flashbacks, we see the preceding half-century of European warfare, and are told that while war was once between gentlemen who played by the rules, it’s now an anything goes affair.

An exchange between Wynne-Candy and his anti-Nazi German friend is telling:

Theo: I read your broadcast up to the point where you describe the collapse of France. You commented on Nazi methods–foul fighting, bombing refugees, machine-gunning hospitals, lifeboats, lightships, bailed-out pilots–by saying that you despised them, that you would be ashamed to fight on their side and that you would sooner accept defeat than victory if it could only be won by those methods.

Theo: Clive! If you let yourself be defeated by them, just because you are too fair to hit back the same way they hit at you, there won’t be any methods *but* Nazi methods! If you preach the Rules of the Game while they use every foul and filthy trick against you, they will laugh at you! They’ll think you’re weak, decadent! I thought so myself in 1919!

It’s rather disturbing to see a German trying to convince an Englishman to use Nazi tactics.  Released in 1943, the film opened to large box office business, and seems to have served as a preemptive justification for Dresden.  Current American affairs come to mind (Colonel Blimp and W. were released on Blu-Ray on the same day without anyone remarking) as do counterinsurgencies in places like Algeria, Afghanistan and Vietnam where Western powers failed because of backlash against the tactics Kretschmar-Schuldorff recommends.

Atrocities can and do work — but only if the voting populace is either unaware of them or is comfortable with them.  This is why Colonel Blimp‘s first flashback storyline consists of a young Wynne-Candy flying off to German in order to deny the existence of concentration camps set up by his government in the Boer Wars.

Of course, a complete picture is much more nuanced.  Stewart in Liberty Valance and Fonda in Clementine shoot at instead of arrest their outlaw enemies, but they acted morally.  For the most part – and especially compared to the Nazis – the British acted morally in World War II.  Punctilious deification of the Rule of Law isn’t moral, and it would have clearly been unethical for the Allies to allow the Nazis to take over Europe.

However, while acting outside the written law, there’s still an ethical code to be followed.  John Ford’s films contain that nuance, but I’m not sure Colonel Blimp does.

Although I’m portraying Colonel Blimp as a potentially dangerous piece of propaganda, it was actually seen as insufficiently hawkish and even possibly anti-British upon its release.  Churchill got it banned from international distribution, and activists campaigned against it.

If you see Colonel Blimp (which you should), I highly recommend this essay by Roger Mellor. 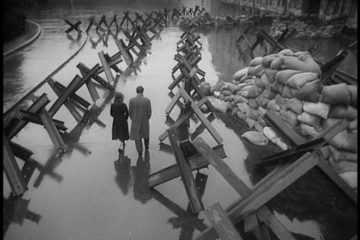