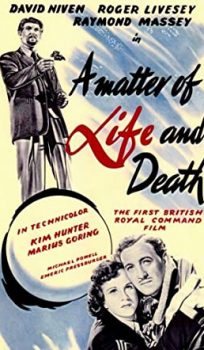 A Matter of Life and Death

Returning to England from a bombing run in May 1945, flyer Peter Carter’s plane is damaged and his parachute ripped to shreds. He has his crew bail out safely, but figures it is curtains for himself. He gets on the radio, and talks to June, a young American woman working for the USAAF, and they are quite moved by each other’s voices. Then he jumps, preferring this to burning up with his plane. He wakes up in the surf. It was his time to die, but there was a mixup in heaven. They couldn’t find him in all that fog. By the time his “Conductor” catches up with him 20 hours later, Peter and June have met and fallen in love. This changes everything, and since it happened through no fault of his own, Peter figures that heaven owes him a second chance. Heaven agrees to a trial to decide his fate.

A Matter of Life and Death