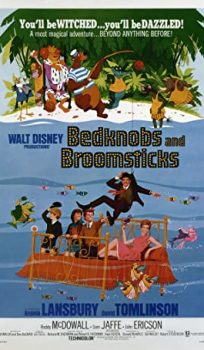 During WWII in England, Charlie, Carrie, and Paul Rawlins are sent to live with Eglantine Price, an apprentice witch. Charlie blackmails Miss Price that if he is to keep her practices a secret, she must give him something, so she takes a bedknob from her late father’s bed and places the “famous magic traveling spell” on it, and only Paul can activate it. Their first journey is to a street in London where they meet Emelius Browne, headmaster of Miss Price’s witchcraft training correspondence school. Miss Price tells him of a plan to find the magic words for a spell known as Substitutiary Locomotion, which brings inanimate objects to life. This spell will be her work for the war effort.