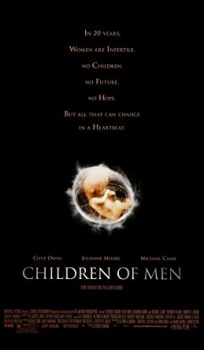 London, 2027. In this dystopian world, humans have been incapable of reproducing for eighteen years for an unknown reason, meaning the imminent extinction of the species. Britain is the one remaining civilized society on the planet, which has resulted in people wanting to immigrate there. As such, it has become a police state in order to handle the immigrants, who are placed into refugee camps. Lowly government bureaucrat Theo Faron, once an activist, is approached by the Fishes, deemed a terrorist group, led by his ex-wife Julian Taylor, who he has not seen in close to twenty years, their marriage which disintegrated following the death of their infant son Dylan during the 2008 flu pandemic. Although the Fishes did use terrorist means in their on-going revolution against the state in the fight for immigrant rights, Julian vows that they now garner support solely by speaking to the people. What she wants is for Theo to use his connections to get transit papers for a young immigrant woman named Kee who needs to get to the coast. Although initially reluctant to do it because of the difficulty, Theo is able to grant Julian this favor, however with the change that he now needs to accompany Kee on her journey. As Theo and Kee progress on that journey, Theo learns more and more about what’s going on, including the reason that Kee needs to get to the coast, the fact that no one in the group knows if their end destination even exists, and that his and Kee’s lives are in greater danger than he believed when they started the journey. But Theo’s sole mission becomes to help Kee at any cost for the survival of the species.