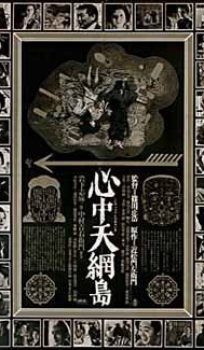 During feudal times in Osaka, Koharu, a courtesan, and Jihei, a married paper merchant, fall in love, they having met in he being one of her regular customers. Their passion for each other is all consuming, especially for Kihei who leaves the running of the paper store in the hands of his wife, Osan. At the beginning of each month – twenty-nine months thus far – Jihei writes a vow to Koharu to free her from her life so that they can be together. However, he doesn’t have the money to pay her ransom, he spending whatever money he has in paying for her services. In the meantime, anyone can pay her ransom, she who would be his possession. Jihei and Koharu have vowed to commit suicide together so that they can be together for eternity if they cannot be together on Earth. Jihei and Koharu’s journey is affected by several people: his brother, Magoemon, and Osan’s parents, who want Jihei to to do right by Osan as her husband and father to their two young children; wealthy Tahei, who believes money should be able to get him anything, including Koharu, who she detests in return; and Osan herself, who knows more about what Jihei is doing than she may let on to him, and who has a special relationship with Koharu in getting what she wants out of her marriage. Jihei and Koharu’s plans for the double suicide are also affected by thoughts of the negative consequences of doing so on the living.