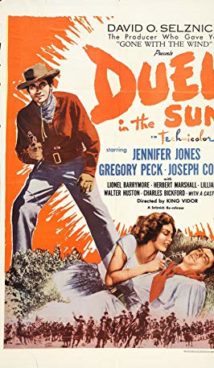 Duel in the Sun

When her father is hanged for shooting his wife and her lover, half-breed Pearl Chavez goes to live with distant relatives in Texas. Welcomed by Laura Belle and her elder lawyer son Jesse, she meets with hostility from the ranch-owner himself, wheelchair-bound Senator Jackson McCanles, and with lustful interest from womanising, unruly younger son Lewt. Almost at once, already existing family tensions are exacerbated by her presence and the way she is physically drawn to Lewt.

Duel in the Sun