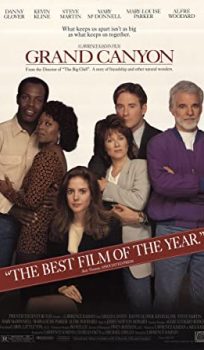 The intertwined stories of a group of Angelenos are told, the stories largely a lament of Los Angeles being a city not their own if it ever was. The stories are also split largely by the black/white race divide. Centered on the black side is Simon, a widowed tow truck driver with a deaf daughter away at college. Simon has an understanding of the gang violence that surrounds his neighborhood, especially as his teenage nephew Otis – Simon’s single-mother sister Deborah’s eldest offspring – is part of a gang, what he believes he has to do to survive in the short term regardless of the consequences. Centered on the white side is Mack, an immigration lawyer who acts largely on impulse only thinking of the implications of his actions after the fact if at all. He also has an unconscious want to be liked. An example of the latter is something he does for Jane, the friend of his paralegal Dee, only seconds after he meets her for the first time, Dee who better understands his actions but doesn’t much like them. Mack’s wife Claire is at a crossroads in life in their fifteen year old son, Roberto, needing his parents less and less. What Claire sees as a sign to renew her life is only the most visible issue in a long line of issues that demonstrate the unspoken problems in their marriage. The one person whose story is told that is somewhat outside of this lament is Mack’s best friend, Davis, a successful producer whose movies, as per his want, must have the “money shot” of the proverbial and literal head exploding in whatever violent action.