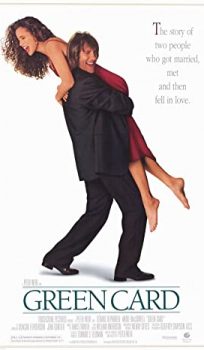 In New York City, American Brontë Parrish and Frenchman Georges Fauré enter into a marriage of convenience, not even meeting until the day of the civil marriage ceremony, introduced by their mutual friend Anton who arranged the union. Brontë and Georges don’t expect to see each other again until they have each gotten what they wanted out of the marriage and are filing for divorce. Aspiring composer Georges has been in the States for five months, has long overstayed his tourist visa, and wants to be a permanent resident to get his green card, and marrying an American will solve that issue. Brontë, a horticulturist, needs to be married to obtain her dream apartment, which contains a geenhouse with a collection of exotic but currently-neglected plans, plus an expansive patio where she can grow plants for her research. Their plans are thrown for a loop when representatives from immigration services make a surprise visit to Brontë’s new apartment–supposedly her and Georges’ new apartment–in a clampdown on such marriages of convenience which constitute fraud. Brontë’s lawyer advises that Georges should move into the apartment until their final hearing with immigration services, during which time they must get to know each other to convince immigration services that their marriage is not just one of convenience. Spending time together might be difficult for both but especially for Brontë as they try to hide their marriage from her friends and family, including her parents with their own idiosyncrasies and her current boyfriend Phil with whom she works. This means keeping them away from the apartment, as the building managers know her only as Mrs. Fauré and not Miss Parrish. But the biggest issue might be overcoming their fundamental differences as humans. They might find that the ultimate end prize is not what would happen after a successful meeting with the immigration representatives.