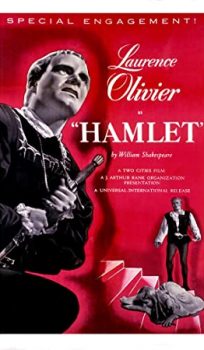 William Shakespeare’s tale of tragedy of murder and revenge in the royal halls of medieval Denmark. Claudius, brother to the King, conniving with the Queen, poisons the monarch and seizes the throne, taking the widowed Gertrude for his bride. Hamlet, son of the murdered King, mournful of his father’s death and mother’s hasty marriage, is confronted by the ghost of the late King who reveals the manner of his murder. Seeking revenge, Hamlet recreates the monstrous deed in a play with the help of some traveling actors to torment the conscience of the evil Claudius. In a visit with his mother, Hamlet expresses his anger and disappointment concerning her swiftly untimed marriage. Thinking a concealed spy in his mother’s chamber to be the lurking Claudius, he mistakenly kills the meddling counselor, Polonius, father of Ophelia and Laertes. Claudius, on the pretext that Hamlet will be endangered by his subjects for the murder of Polonius, sends the prince to England.