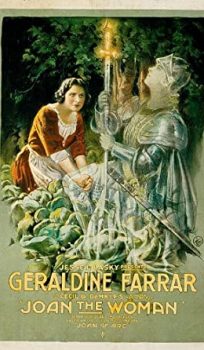 John Trent, a World War I British officer, finds an ancient sword in his trench bunker just prior to volunteering for what will amount to a suicide mission the next day. That night he is visited by the spirit of Joan of Arc and is transported back to the 15th Century. Joan’s career begins when, as a peasant girl, she meets Trent’s ancestor, also an English soldier, fighting for the Burgundians. After Trent is captured, Joan is brought to the attention of the beleaguered Dauphin, heir to the French throne, who cannot be crowned because the English hold the royal city of Orleans. The weak Dauphin is impressed by her vision and apparently heaven-sent powers which border on the supernatural and ultimately gives her command of the armies. She is victorious at Orleans and the new King is crowned. Joan resists Trent’s entreaties of love and continues her struggle to free the rest of her country from English occupation. Sinister forces, both English and French, conspire against her and she is captured. Tortured and condemned, she dies at the stake but never loses her faith and vision.