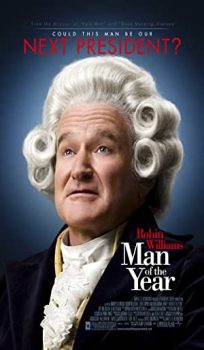 Man of the Year

Tom Dobbs, comedic host of a political talk show – a la Bill Maher and Jon Stewart – runs for President of the US as an independent candidate who, after an issues-oriented campaign and an explosive performance in the final debate, gets just enough votes to win. Trouble is he owes his victory to a computer glitch in the national touch-screen voting system marketed by Delacroy, a private company with a rising stock price. To protect their fortune, Delacroy executives want to keep the glitch a secret, but one programmer, Eleanor Green, wants Dobbs to know the truth. Can she get to him?

Man of the Year

"Film as dream, film as music. No art passes our consciousness in the way film does, and goes directly to our feelings, deep down into the dark rooms of our souls." - Ingmar Bergman