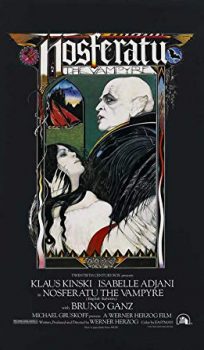 Jonathan Harker is sent away to Count Dracula’s castle to sell him a house in Wismar where Jonathan lives. But Count Dracula is a vampire, an undead ghoul living off of men’s blood. Inspired by a photograph of Lucy Harker, Jonathan’s wife, Dracula moves to Wismar, bringing with him death and plague… An unusually contemplative version of Dracula, in which the vampire bears the curse of not being able to get old and die.