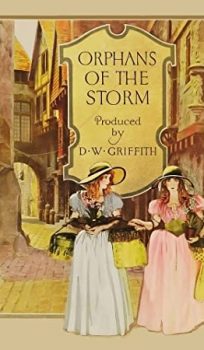 Orphans of the Storm

Henriette and Louise, a foundling, are raised together as sisters. When Louise goes blind, Henriette swears to take care of her forever. They go to Paris to see if Louise’s blindness can be cured, but are separated when an aristocrat lusts after Henriette and abducts her. Only Chevalier de Vaudrey is kind to her, and they fall in love. The French Revolution replaces the corrupt Aristocracy with the equally corrupt Robespierre. De Vaudrey, who has always been good to peasants, is condemned to death for being an aristocrat, and Henriette for harboring him. Will revolutionary hero Danton, the only voice for mercy in the new regime, be able to save them from the guillotine?

Orphans of the Storm