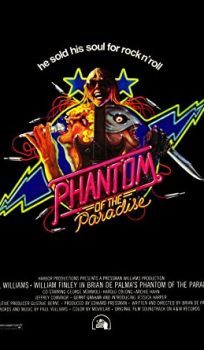 Phantom of the Paradise

Notorious record tycoon Swan has sold his soul to the devil for eternal youth and success – 20 years ago. Swan’s current scheme is to steal the music from meek composer Winslow Leach to celebrate the opening of his rock palace, The Paradise. While trying to stop Swan, Leach was framed and convicted for drug dealing, and becomes the victim of a freak accident that leaves him horribly disfigured. He takes refuge in the cavernous Paradise, hiding his mangled face beneath an eerie mask and planning gruesome vengeance upon Swan – and everyone else who has hurt him. However, Leach signs a contract with Swan to complete his rock opera based on the legend of Faust for an aspiring singer – Phoenix.

Phantom of the Paradise