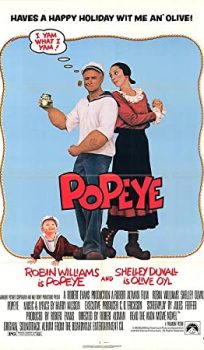 Popeye, a squinty-eyed, corn cob pipe smoking, spinach hating, mumbling sailor man with overly muscular forearms partly the result of genetics, has just arrived in the port town of Sweethaven. He has been sailing the seven seas in search of his father who abandoned him when he was two. He is viewed suspiciously by many in town, with an exception of Wimpy, who will become friends with anyone who will buy him a hamburger, he otherwise paying for said hamburger on Tuesday if he can get it today. One who does view him suspiciously is Olive Oyl, the lanky, work boots wearing daughter of his rooming house landlords. Due to the changing situation, including they discovering an abandoned infant boy who Popeye names Swee’pea in honor of the town and who they decide to raise, Popeye and Olive fall for each other, Olive in the process leaving who was to be her fiancé, Bluto, the town bully who rules Sweethaven on behalf of the mysterious Commodore. Bluto does not take this emerging situation lying down, he using Swee’pea as a pawn in getting Olive Oyl back. What happens in this situation in Popeye fighting for both Olive Oyl and Swee’pea is partly affected by discovery of what happened to his father.