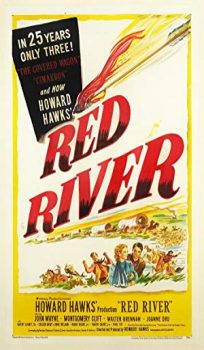 Fourteen years after starting his cattle ranch in Texas, Tom Dunston is finally ready to drive his 10,000 head of cattle to market. Back then Dunston, his sidekick Nadine Groot and a teen-aged boy, Matt Garth -who was the only survivor of an Indian attack on a wagon train – started off with only two head of cattle. The nearest market however is in Missouri, a 1000 miles away. Dunston is a hard task master demanding a great deal from the men who have signed up for the drive. Matt is a grown man now and fought in the Civil War. He has his own mind as well and he soon runs up against the stubborn Dunston who won’t listen to advice from anyone. Soon, the men on the drive are taking sides and Matt ends up in charge with Dunston vowing to kill him.