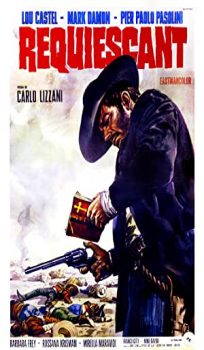 In Fort Hernandez, San Antonio, a group of Mexican villagers is betrayed by Confederate soldiers led by aristocratic Officer George Bellow Ferguson and they are slaughtered. After the massacre, the boy Requiescant wanders in the desert but he is rescued by the religious Father Jeremy that is traveling with his wife and daughter in his wagon. The boy is raised like a son and when he grows-up, Requiescant is very close to his stepsister Princy. One day, the rebellious Princy leaves her family, traveling with a theater company. Requiescant promises to his foster family to seek Princy out and bring her back home. Along his journey, Requiescant proves that he is a great skill with his gun to self-protect. When he arrives in San Antonio, he finds that the city belongs to Ferguson. He goes to a saloon and he finds that Princy has become a prostitute pimped by Ferguson’s henchman, the gunslinger Dean Light. Requiescant asks Ferguson to let Princy go with him, but the boss of the town is reluctant to release her. When Requiescant learns that he is Mexican and the fate of his family, he decides to help the priest Don Juan to start an uprising against Ferguson.