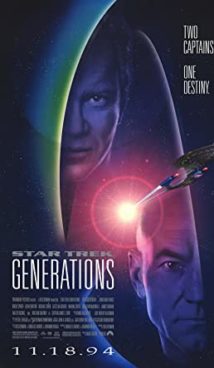 In the late 23rd century, the gala maiden voyage of the newly-christened Enterprise-B boasts such luminaries as Pavel Chekov, Montgomery Scott and the legendary Captain James T. Kirk as guests. But her maiden voyage turns into a disaster as the unprepared starship is forced to rescue two transport ships from a mysterious energy ribbon. The Enterprise manages to save a handful of the ships’ passengers and barely succeeds out intact… but at the cost of Captain Kirk’s life. 78 years later, Captain Jean-Luc Picard and the Enterprise-D crew find themselves at odds with renegade scientist Dr. Tolian Soran… who is destroying entire star systems. Only one man can help Picard stop Soran’s scheme… and he has been dead for 78 years.