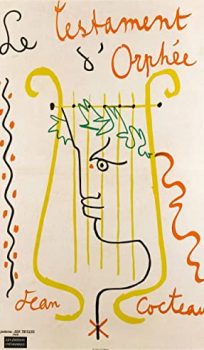 The poet Jean Cocteau is lost in space-time. He has been in the 18th century and is now turning up at different moments in professor Langevin’s life. The professor has invented some bullets, which travel faster than light. With one of them he kills Cocteau, who is resurrected as his old self, but is still caught in the space between fantasy and reality. At a gypsy camp a woman saves a photo out of the fire and restores it. On the photo Cocteau recognizes Cégeste from his film Orphée. He tears the photo into pieces and throws it into the sea. Immediately Cégeste himself jumps out of the water. He brings Cocteau to a rogatory commission led by Heurtebise and The Princess from the film Orphée. Cocteau admits that he has constantly attempted to enter a world which is not his own, a world that is beyond the limits of man, and that disobedience is like a religion for him. The commission imposes on him the sentence of life. In a hall inside some stone ruins the goddess Athena kills Cocteau with her spear. His friends assemble around his body, but he resurrects from death, and walks away along a small road. Cégeste comes out from a rock and draws Cocteau into it, because they don’t belong to life on earth.