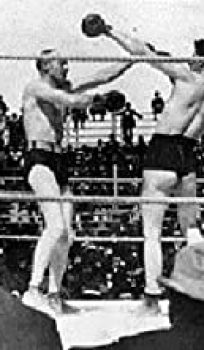 This legendary fight was filmed on March 17, 1897, using 63mm film that produced an aspect ratio of about 1.75:1. Using three adjacent cameras, Enoch Rector recorded the entire fight, simultaneously creating the world’s first known feature film, as the resulting footage lasted over 90 minutes in length. About a quarter of the film survives today.