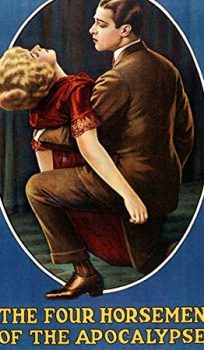 The Four Horsemen of the Apocalypse

Julio Madariaga is the Argentine patriarch of a wealthy family. He has two daughters, the elder wed to a Frenchman and the other to a German. He prefers the Frenchman and his family, especially his grandson Julio, causing jealousy from the German and his three sons. When Madariaga dies, the family splits up, each son-in-law returning to his own country. The Frenchman and his own move to Paris, where Julio becomes an artist and has an affair with an unhappily married woman, the lovely Marguerite Laurier. Her husband finds out, but before he can finalize a divorce, World War One rears its head and both sides of the family will endure great suffering in the conflict, especially since they must fight one another on the battlefield.

The Four Horsemen of the Apocalypse