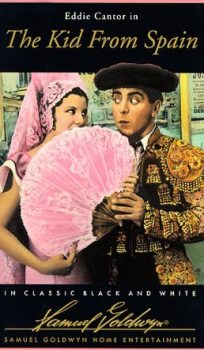 The Kid from Spain

Eddie and his Mexican friend Ricardo are expelled from college after Ricardo put Eddie in the girl’s dormitory when he was drunk. Per chance Eddie gets mixed up in a bank robbery and is forced to drive the robbers to safety. To get rid of him they force him to leave the USA for Mexico, but a cop is following him. Eddie meets Ricardo there, Ricardo helps him avoid being arrested by the cop when he introduces Eddie as the great Spanish bullfighter Don Sebastian II. The problem is, the cop is still curious and has tickets for the bullfight. Eddie’s situation becomes more critical, when he tries to help Ricardo to win the girl he loves, but she’s engaged to a “real” Mexican, who is, unknown to her father, involved in illegal business. While trying to avoid all this trouble, Eddie himself falls in love with his friend’s girl friend’s sister Rosalie, who also want to see the great Don Sebastian II to kill the bull in the arena.

The Kid from Spain