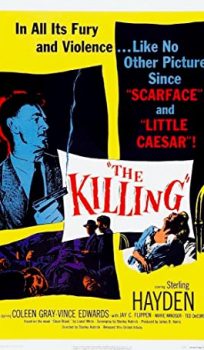 After just being released from a five-year stint in prison, Johnny Clay has assembled a five-man team, including two insiders, to carry out what he estimates will be a $2 million heist at Lansdowne Racetrack, the take to be split five ways, minus expenses. Besides Johnny, none of the men truly are criminals in the typical sense. In addition to the other four team members, Johnny has hired two men outside of the team to carry out specific functions for a flat fee; the other four will not meet the two men for hire or know who they are, while the two men for hire will not be told of the bigger picture of the heist. None involved are to tell anyone, even their loved ones, about the job. Each of the five have a specific reason for wanting his share of the money: Johnny, in wanting to get married to his longtime girlfriend Fay, the two who have known each other since they were kids, realizes that to live comfortably, he has to shoot for the moon instead of carrying out the penny-ante stuff that put him behind bars; Marvin Unger, a bookkeeper who is bankrolling the plan, is doing it out of his friendship and loyalty to Johnny; Randy Kennan, a crooked police officer, is already late with his repayment to a loan shark; Mike O’Reilly, one of the track’s bartenders, wants to be able to provide better overall care, most importantly medical, to his bedridden wife, Ruthie O’Reilly; and milquetoast George Peatty, one of the track’s ticket clerks, is trying to buy back the love of his shrew of a wife of five years, Sherry Peatty, if he ever had her love at all. The elaborate plan requires meticulous timing by all seven men. Beyond any unforeseen problems causing the plan to fail, what the other four team members are unaware of is that weak-minded George told Sherry of the broad issue that he will be involved in a heist in an effort to hold on to her emotionally; she, in turn, told her boyfriend Val Cannon, with Sherry and Val having their own ideas of absconding with the entire take of the heist after the fact.