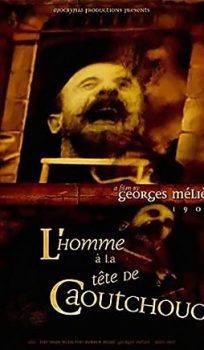 The Man with the Rubber Head

A chemist in his laboratory places upon a table his own head, alive; then fixing upon his head a rubber tube with a pair of bellows, he begins to blow with all his might. Immediately the head increases in size and continues to enlarge until it becomes truly colossal while making faces. The chemist, fearing to burst it, opens a cock in the tube. The head immediately contracts and resumes its original size. He then calls his assistant and informs him of his discovery. The assistant, wishing to experiment for himself, seizes the bellows and blows into the head with all his might. The head swells until it bursts with a crash, knocking over the two experimenters.