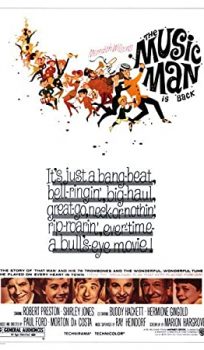 It’s the early twentieth century American Midwest. A con man, currently going by the assumed name Harold Hill, has used several different schemes to bilk the unsuspecting, he now traveling from town to town pretending to be a professor of music – Gary (Indiana) Conservatory of Music, class of ’05 – being able to solve all the respective towns’ youth problems by forming a boys’ marching band. He takes money from the townsfolk to buy instruments, music, instructional materials and uniforms for their sons. However, he, in reality, has no degree, knows nothing about music, and after all the materials arrive and are distributed, hightails it out to move to the next town with all the money never to be seen again. Many of the traveling salesmen in the territory have been negatively impacted by him, as the townsfolk then become suspicious of any stranger trying to sell them something. For Harold’s scheme to work, he has to gain the trust of the local music teacher, he usually doing so by wooing her, regardless of her appearance. And if the town doesn’t believe it has a youth problem needing to be fixed, he will manufacture one for them. That is the case when he arrives in River City, Iowa, population 2,212, where he will have some unexpected help from Marcellus Washburn, a friend and former grifter colleague who he didn’t know now lives in River City, has gone straight, but still wants to make sure Harold survives his stay in town. The music teacher he has to impress in River City is spinster Marian Paroo, who is also the town librarian. Unlike all the other River Citizens who he is able to impress with his fast talking sales pitches, he is unable to impress suspicious Marian, whose hard as nails exterior is partly due to her somewhat removed standing in the town, as all the gossipy housewives believe she is a smut peddler – encouraging the teenagers to read authors such as Chaucer and Balzac – and mistakenly believe she got her position as librarian through less than scrupulous means. What Harold does not know is that one way to Marian is through her young adolescent brother, Winthrop Paroo, a sullen boy who has withdrawn from life since the death of their father two years ago and when he started to lisp. Complications for Harold ensue when he starts to fall for Marian, something that has never happened with another music teacher before. Further complications may ensue for him if any of those traveling salesmen who have been following his same route through the territory catches up with and exposes him.