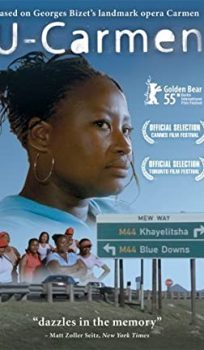 U-CARMEN is a feature film based on Georges Bizet’s 19th-century opera that was filmed on location in a modern South African township setting. The energy, compassion, and heat of township life in all its elements create a constantly visually interesting and dynamic background for the unfolding of the story, which owes part of its huge popularity to the thrilling combination of a violent gangster tale with a passionate, almost supernatural love story. As it unfolds, it explores issues of fame and wealth, the position of a strong and independently minded woman in a very masculine society and, perhaps most importantly, the incomprehensible attraction between abuser and victim. Bizet’s opera, based on Prosper Merimée’s novel, premiered in Paris on March 3, 1875. Set in a poor area of Seville, the story of the magnetic woman who seduces, loves, and ultimately destroys her lover and herself, is well known. Girl (Carmen) seduces boy (Don José), boy becomes completely obsessed, girl leaves boy for another (the Matador), boy in a jealous rage kills her. Carmen’s mother-obsessed soldier lover who is displaced by the glamorous matador is one of the greatest tragic figures in all of musical theater. But the story is her story. Why does she push her soldier into violence? Why doesn’t she escape at the last moment? What drives her to destruction? Although these fascinating aspects of human relationships are explored in a penetrating and at times uncomfortable way, this is no intellectual journey but a bawdy, passionate, and vibrant tale with enormous warmth and heat, and some of the greatest tunes ever written. The fantastic vitality and huge skill of the performers from Dimpho Di Kopane make an impact beyond that achieved by any filmed opera to date. The soundtrack, recorded by Dimpho Di Kopane with Imbumba, a young South African orchestra, combines Bizet’s score with traditional South African music, which creates a powerful musical experience.