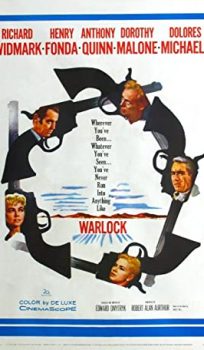 The town of Warlock is plagued by a gang of thugs, leading the inhabitants to hire Clay Blaisdell, a famous gunman, to act as marshal. When Blaisdell appears, he is accompanied by his friend Tom Morgan, a club-footed gambler who is unusually protective of Blaisdell’s life and reputation. However, Johnny Gannon, one of the thugs who has reformed, volunteered to accept the post of official deputy sheriff in rivalry to Blaisdell; and a woman arrives in town accusing Blaisdell and Morgan of having murdered her fiancé. The stage is set for a complex set of moral and personal conflicts.