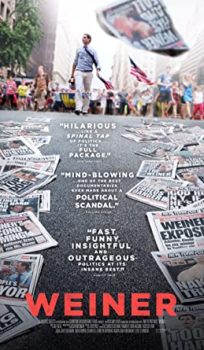 Serving seven consecutive terms, Anthony Weiner, good friends with and political allies to the Clintons, was once a highly respected member of Congress from New York City, he seen as a man sticking up for the every day person. That all changed in June, 2011 when he was forced to resign in disgrace after admitting that he did tweet lewd “headless” photos of himself from his public Twitter account to women he met online, and that it was not the work of a hacker or that the photos were of someone else. At the time, his wife Huma Abedin, herself a key aide to Hillary Clinton, was pregnant with their first child, she who decided to stand by her man. Two years later with Abedin still by his side, Weiner tries to resurrect his political career in a run for New York City mayor. He realizes that he has an uphill battle not only because of the known previously tweeted photos, but that there are other lewd photos from that era that may also come to light during the campaign. Regardless of the 2011 resignation, Weiner may not want to admit that any wrongdoing in his personal life should affect his ability to do his job as a politician, congressman, mayor or otherwise. He is probably well aware that the behavior associated with the tweeted photos will dog him during the entire election campaign – with some voters not caring what he does in his personal life, some never willing to forgive or forget such behavior, and some in the middle, those who he has to convince to vote for him. But will the collective “they” – including his campaign staff and Abedin – care and forgive a second time around if the behavior has continued, especially if he did or does not own up to it?