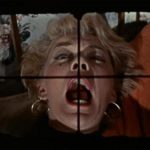 Peeping Tom is about Mark Lewis, a focus puller for a movie production crew.  He constantly carries a camera with him, and uses a hidden dagger in the tripod’s leg to stab women’s throats while filming their frightened faces for a documentary. 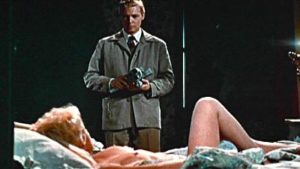 l Powell’s commentary is deliciously complex.  He’s not subtle about attacking the audience with his camera – he jabs right at us from the very beginning.  We witness a murder from Mark’s camera’s point of view, and then we watch it again, on a projector.  Mark isn’t killing/filming these women for his own private enjoyment.  He’s making a film for an audience.

This theme (like much else in the movie) is repetitively mirrored.  Mark’s father tortured him for the future good of humanity, and for his series of books.  He had an audience.  Mark’s pornography is purchased by gentlemen at the newspaper shop, while Mark watches.  Everyone is creating and consuming; even the blind woman wants to know what is on the film while she is being filmed for a different segment.

Powell really starts to run away with the joke.  Glamour model Pamela Green is cast as Mark’s pornography model.  Moira Shearer, who dances and dies for us in Powell & Pressburger’s The Red Shoes, does the same for Mark and us here.  And, Powell himself plays Mark’s father and casts his son to play young Mark…He lays the irony on pretty thick.

The film climaxes as the line between producer and consumer/subject and audience is completely erased. 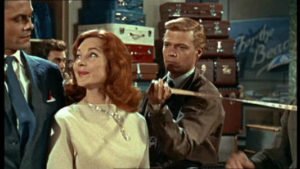 Peeping Tom, along with Hitchcock’s Vertigo, are the icons of the “male gaze” in film theory.  We see women from the perspective of men, and women see themselves from the perspective of men.  Mark’s girlfriend, Helen, assigns herself the ‘Manic Pixie Dream Girl’ script, and devotes her every moment to positioning herself in Mark’s mental frame in the way she thinks is best.  The star of the movie Mark works on devotes herself to positioning her body in the way the male director desires.  (The stand-in positions herself for both the director and Mark; the porn models clearly do as well)

Even though Helen is capable of writing a book, she needs a man to provide the pictures for it, and even to tell her what sort of pictures are needed.  She has no idea how to create an image on her own, and thinks it is impossible. 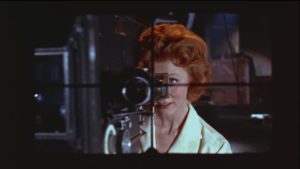 Helen’s blind mother most literally doesn’t have a gaze of her own.  She, more than anyone, is the most aware of Mark’s gaze and of its danger.  When she confronts Mark, she breaks down and reveals her total dependence on seeing through his eyes — she begs both to know what is on the screen (“What am I seeing?!”)  and to have her picture taken. 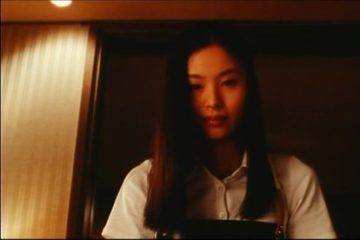 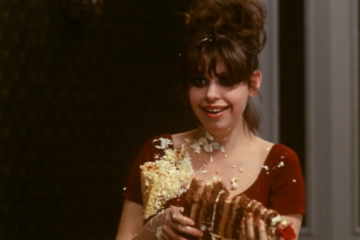