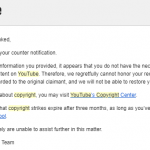 Thanks to the Copyright Term Extension Act, most copyright works of art and literature enter the public domain 96 years after the year of their publication. This year, the list includes literary classics like The Great Gatsby and Mrs. Dalloway as well as classic silent films like Go West and Ben-Hur.

To do my part in the celebration, I prepared several videos to upload to YouTube on January 1, 2021. Most of these videos are up now, without issue.

However, two films have been claimed as copyright by Warner Bros., despite the copyright law’s clarity.

The Big Parade and Ben-Hur: A Tale of the Christ were released in 1925. The versions I uploaded had no sound or music that might complicate the copyright situation. So when I received a Copyright Claim on YouTube from Warner Bros., I assumed it was a mistake. YouTube’s algorithms automatically match videos with content claimed as copyright, whether it is or not.

I filed an appeal, believing that as soon as a human with Warner Bros. saw the note, they would drop the claim.

That’s not what happened.

Warner Bros. kept the claims in place, and I filed a second appeal. I informed Warner Bros.:

This film was published in 1925 and is now in the public domain.

“On January 1, 2021, copyrighted works from 1925 will enter the US public domain, where they will be free for all to use and build upon.”

So, I was surprised and disappointed when this note came back from YouTube:

Clear as mud, right? YouTube decided I don’t have the rights to upload public domain content, won’t detail why and are “unable to assist further in this matter.”
Now I have two copyright strikes against my account.
I did a google search of the claimant’s email address. The results included several pages with people claiming the email address used is not actually someone with Warner Bros. and that the user has been “scamming” people with it for years.
I’m not posting that email address at this time because I haven’t verified any of those allegations. I have sent an email to that address requesting the removal of the takedown request. I’ll update this if I hear back.