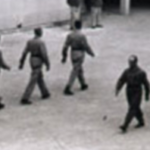 René Clair, From Silents to Sound

The apex of René Clair’s career was during the transition from silent film to sound. Other great directors successfully made the move during the late 20’s and early 30’s, but Hitchcock still had yet to perfect his craft, while Chaplin simply put it off as long as he could. Clair managed to keep a consistent quality and style at the same time he added audio.

While Entr’acte runs as an abstract, Monty Python-esque work of Dada, An Italian Straw Hat is a delightful farce and Freedom for Us is a political satire, Clair’s emphasis on movement across the screen and a rapid pace tie them all together.

Under the Roofs of Paris was France’s first blockbuster talkie. Clair had spent years warning against the potential problems of adding sound to film, but now if he was going to do it, he was going to do it right. The musical numbers flow into the plot organically; there are no awkward stops and starts between dialogue and singing the way there are in most musicals, from The Jazz Singer on forward.

Released just three years apart from each other, Le Million and An Italian Straw Hat provides the best direct comparison between pre- and post-sound Clair. They both feature MacGuffins (a straw hat and a lottery ticket) that kick off a rapid-pace search through the city, with a large cast of comic characters. In Straw Hat, Clair dispenses with the ubiquitous title cards that plagued other films of the time, and focused the humor on visual action. Likewise in Le Million, there isn’t much gratuitous dialogue. When people do talk, it’s usually to say something funny. But when it does fall silent, the silence doesn’t seem out-of-place or shoehorned in; the silence is as natural as the sound is.