Songs from the Second Floor – Not with a bang, 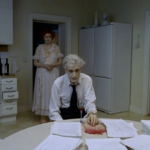 Songs from the Second Floor – Not with a bang,

1999 was a peak year for this anxiety as expressed in Hollywood. Magnolia, Fight Club, The Matrix and the year’s Best Picture American Beauty all presented the idea that America was at a dead end. 2000’s Songs from the Second Floor reminds us that it wasn’t just America who felt that way.

Things were good at the turn of the century. Communism was dead, buried and rotting in the grave. Western liberalism had won, and history itself had ended some time ago. There’s was nothing left to fight for.

Everyone in Songs from the Second Floor is dead and as stagnant as the city’s traffic. They wear ghoulish makeup and are covered in the ashes of Eliot’s wasteland. They live in a world designed by Kafka, but lack the sense of outrage the German-speaking Jew gave to his characters. They whimper through their world, too tired to imagine any other possible life. 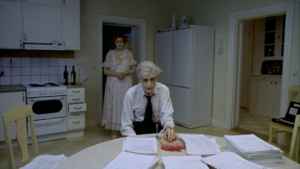 The contemporary reviews of Songs saw it as a critique of capitalism. (see Roger Ebert’s review and Peter Bradshaw’s) That element is certainly not subtle — the flagellating stockbrokers and the corporate human sacrifice are haunting set pieces on their own. But Songs also taps into a deeper sense of purposelessness and mass depression. We see the ghouls in sexless marriages, in shallow conversations, watching fascism on television mindlessly, waiting endlessly, and wandering aimlessly.

The God of Songs from the Second Floor isn’t dead. Worse, he’s alive and simply placed in an asylum and taken to the trash heap because he wasn’t profitable. To contradict Nietzsche, we do not “feel the breath of empty space.” Instead, the characters feel nothing — apart from the occasional bout of rage.

The films of 1999 and 2000 expressed a widespread desire to break free from the established liberal order.  They got their wish. Think of what has happened in the 17 years since its release. The butterfly ballot, 9/11, “Weapons of Mass Destruction,” the economic collapse and growing far-right populism.

Every major American institution — from the CIA to Major League Baseball, from the Supreme Court to even now the Academy Awards has had its fundamental powerlessness exposed in this young century.

Songs presages this chaos. It takes place in the wake of an economic disaster. When the banks go and the businesses fail, what is left for us?