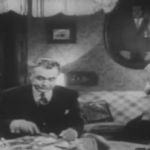 After seeing The Woman in the Window – made with the same director and lead cast the year before – I was much more sympathetic to Joan Bennett’s character in Scarlet Street than I perhaps should have been.  It was, after all, based on the French novel La Chienne (The Bitch).

It also took me an inordinately long time to realize that Miss. Bennett was a prostitute.  Perhaps I, like Edward G. Robinson didn’t want to consider the possibility.  Even after The Woman in the Window, and the warnings it provided, I wanted to believe that she really could have feelings for Chris.  Maybe she would realize that Johnny was just stringing her along, and she’d leave him for the nice, sensitive gentleman who likes to paint.

Of course, Chris is married, and this is a Frtiz Lang film. As with The Woman in the Window, passion – both artistic and sexual – lead to disaster if not constrained, and perhaps, even suffocated.  Emasculation is survival.

Even in Kitty and Johnny’s line of work, there are codes to follow and lines not to cross.  If they keep their heads down and play it safe, they can maintain a comfortable life.  Once they get greedy; once they try a different tack and stray off the path of turning tricks; that’s when they court disaster.

Chris’s Raskolnikovian nightmare – “Johnny, oh Johnny!”  “Lazy legs.”  “Jeepers, I love ya, Johnny!” – is the auditory version of Ray Milland’s booze-starved stagger through the city in The Lost Weekend of the same year.  And, it’s a precursor to the fast-paced insanity of Aronofsky’s Requeim for a Dream and Black Swan.

I also can’t help but wonder if Chris’s marriage inspired parts of Stanley Kubrick’s Lolita.  The portrait of his wife’s late husband and the way it serves as her ikon brings Shelley Winters’s devotion to her husband’s ashes to mind.  As does the betrayal and hatred towards the second-hand wife.  And, more obviously, the Buñuelian foot fetish.