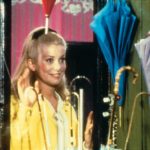 I saw The Umbrellas of Cherbourg last June, in just enough time to spoil La La Land. I’ve learned I’m not the only one to have had the same experience – my father knew exactly how Ryan Gosling and Emma Stone’s relationship was going to progress and how the film would end five minutes after La La Land began. Annie Gabillet has a good writeup at PopSugar comparing the two films. It’s not quite strong enough to call La La Land a remake, but the studio could have plausibly marketed it that way if Cherbourg were more widely known.

The bright primary colors and aggressively earnest characters fit in with the rest of the decade’s musicals, (think The Sound of Music and West Side Story) but otherwise it doesn’t feel like a film from 1964. Cherbourg‘s earnest, feminine energy from 1964 immediately reminded me of twee pop from the late 2000’s.

The pure joy of watching the early numbers disarms an audience from any cynicism they might bring in. Cherbourg is like a good folk song. It must be charming enough to overwhelm the cheesiness inherent in the genre, but cannot be so poppy that it trivializes the sadness within.

The bright, bubblegum pinks and yellows of the early stages of the film remind us of a young girl’s bedroom. It evokes the fairyland feel appropriate for Geneviève’s age, and her idea of love. (And most of Hollywood’s idea of love, for that matter.)

Compare this to the white-and-black dominated palette from the Esso Station scene at the end of the film. Gone are Guy’s blue shirt and bright brown jacket. The only The colors are still more vibrant than those of your average film’s, but when compared to the pastry-shop tones from early int he film, it’s practically monochrome.

The characters are color-coded too; Guy, who wants a boy, is blue, while Geneviève is pink. Characters who long for romance but don’t have it are orange; even Geneviève is at one point.

A large number of reviewers have taken issue with La La Land‘s characters. My favorite bon mot on the topic comes from David Cox of The Guardian, who calls La La Land “the tale of two narcissists who sacrifice love for self-interest.”

Part of the problem may be that La La Land‘s protagonists have the privilege of choosing their problems. Although there are hints that Geneviève’s and Guy’s visions of the future may not be compatible, people have stayed together through worse problems. It’s external forces that act as the catalyst for their departure from one another — the draft for Guy and the economic pressure of single parenthood for Geneviève. They do what adults do, and make their way through the world the best they can.