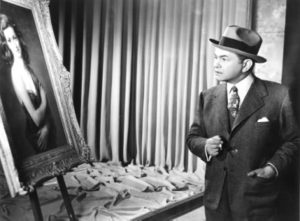 Spoilers abound in this post, so please consider watching The Woman in the Window before reading.

The “it was all a dream” ending of the film has frustrated many viewers.  The audience has become emotionally engaged in what happens to Professor Wanley, and are disappointed to learn that none of it “was real.”  So, why would director Fritz Lang end his thrilling noir on such a downbeat?

In Alfred Hitchcock’s The Wrong Man the strength of genre expectation convinced the audience to believe our protagonist was innocent, despite the mountain of evidence Hitchcock stacked against him.

Likewise, Fritz Lang uses just the right clues to play a sort of mean trick.  At several points during the dream, the viewer (or at least this viewer) smiled at some of the absurdities in the plot. 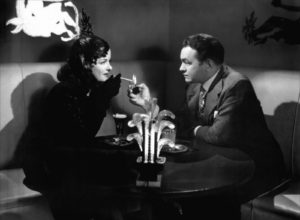 Would a lovely young woman really be fall in love with a man like Professor Wanley – especially after just a day?  Would she be able to afford her apartment, despite having no source of income?  Would the professor really act so transparent around his attorney friend, blurting out incriminating thoughts?

Fritz Lang comes back and says to the viewer “this should have been dead giveaways!”  But when the viewer is presented with these clues, he figures they are just genre conventions and goes along with the story, passively.  Instead of “this is only a dream,” he thinks “this is only a movie.”

Of course, Lang doesn’t entirely play fair, but he’s upfront about how he rigged the game.  After waking, Professor Wanley revisits all the people he met who appeared as characters in his dream; a device known by general audiences from The Wizard of Oz, released just 5 years earlier.  But of course, the audience never saw any of these people before the dream… only Professor Wanley did.  This way, none of the clues come from genre expectations, but from their subversion.

Oz, of course, took its cue from 1920’s The Cabinet of Dr. Caligari.  Fritz Lang himself wrote that film’s famous twist ending, in which our protagonist awakes and we discover he has been hallucinating in a mental institution.  The faces of the characters in his vision were taken from the “real” people in the hospital, both fellow patients and the doctor. 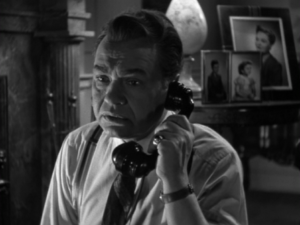 Cesare’s, the visions of Professor Wanley can be attributed to a guilty id.

“Viewed in retrospect, Wanley’s attempt to protect his life appears to have been hopeless from the start; his doom apparently produced a series of circumstances which gradually revealed the potential evil within him, and which necessarily led to the eventual self-destruction. This inevitable doom is the whole point of the dream, which is the narrative working out of the fears that control Wanley’s existence. When his family leaves on vacation, the reserved professor is suddenly free to pursue the suppressed desires that he constantly harbors. The dream is the reason why he is afraid to pursue those desires. It is a warning of the possible results of giving in to the temptation represented by Reed.” – Spencer Selby, Noir of the Week