Throne of Blood: Why Macbeth?

Throne of Blood is director Akira Kurosawa’s adaptation of Shakespeare’s MacBeth.  He makes the bard’s tale Japan’s own, replacing Scottish warlords with armies of Japanese Samurai.  Yuwen Hsiung is one of many who have written about the ways Kurosawa integrated traditions with Japanese Noh theater into his telling of one of the West’s canonical stories. 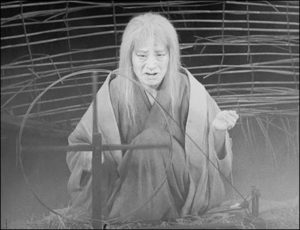 One interesting note he makes:

“Neither the Japanese nor Chinese perspectives allow multiple witches. Rather than a collective group dedicated to malevolent acts against humans, Kurosawa’s film and the Taiwan theater present figures closer to the shamans in East Asian culture, who function between the human world and nature. These shamans practice witchcraft like witches, but their status is that of intermediary between the human community and the laws of nature; they are not, of themselves, makers of discord and disharmony. The adaptations therefore size the number of witches down to one…”

Two of Kurosawa’s most notable Japanese contemporaries, Yasujirō Ozu and Kenji Mizoguchi, also looked for ways to blend Japanese and American storytelling.  This helped them escape the censors, appease a world suspicious of Japanese culture, and seek the survival of their conquered past by fusing it to a new hegemony — along with a genuine desire to shape post-War Japan into a better society.

trying to change the perception of Japanese culture by adapting MacBeth?  One of the play’s central themes is that of disobedience to authority and a willingness to upset the moral order.  It pleased King James I (the victim of kidnappings and assassination attempts) to see his subjects taught the negative consequences of disobeying the emperor.

Such an act by a Japanese subject towards his emperor would have been unthinkable in the minds of anti-Japanese racists in the West.  An adaptation of MacBeth – besides flattering Kurosawa’s anglophone conquerors – would give him the opportunity to remind the West that Japanese history is also full of rebels and revolutionaries.  Although MacBeth (Washizu in the film) is still a negative character, the fact of his existence is a positive one, in the disingenuous sense.

Further, historian John W. Dower writes this about the stereotype –

“up to the very moment of Japan’s surrender, American and British “Asia specialists” routinely characterized the Japanese people as an “obedient herd” incapable of genuine self-government. At first glance, this might seem an unusually crude example of Western racism. In fact, it was a conservative, elitist observation that was reinforced by the rhetoric and practices of Japan’s own autocratic leaders and ideologues. The most obvious wartime Japanese counterpart of the Anglo-American image of the “obedient herd” was “the hundred million hearts beating as one” (ichioku isshin). The Western “experts” who spoke so condescendingly about the inability of ordinary Japanese to govern themselves were essentially parroting views they had heard in Japanese propaganda and upper-class Japanese ruling circles.”

Kurosawa’s family was a part of the upper-middle class, and it’s unlikely that he did not share some of these stereotypes about his lower-class countrymen.  So Throne of Blood may have been intended demonstrate a rebellious streak in Japanese history to the Japanese themselves as well. 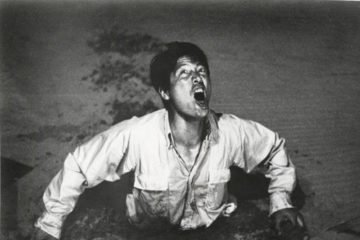 SOFT LAUNCH: I've been working on a new website that is a close cousin to Films Ranked -- Music Videos Ranked.

Please check it out and let me know what you think -> https://www.musicvideosranked.com/

Brigitte Helm as the Maschinenmensch (Machine-Person) in Metropolis (1927)