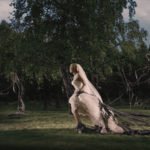 When the world ends “..depressives and melancholics act more calmly in violent situations, while “ordinary, happy” people are more apt to panic. Melancholics are ready for it. They already know everything is going to hell.”

Or so Lars von Trier’s therapist told him, according to the Danish Film Institute, inspiring his end-of-the-world film Melancholia – in which the depressed, neurotic bride is the only character who acts appropriately in the face of the apocalypse.

The film starts with a scene showing a large planet colliding with Earth, destroying it completely.  The suspense is dispensed with, we move to the trivial matter of how organic life spent its final days.

Kirsten Dunst plays Justine, a gorgeous American bride marrying a handsome man she seems to love in a giant castle.  She blushes at compliments and praise, she smiles and laughs.

She tells people this wedding is what she wants in order to please them – and then she runs off by herself to cry.  She urinates on the golf course, she takes a bath instead of cutting the cake with her groom, and she leaves the marital bed early to have sex with a new co-worker.

She seems to genuinely hate the way she behaves.  She’s acting out of depression and of the titular “melancholia.” (“a mental condition and especially a manic-depressive condition characterized by extreme depression, bodily complaints, and often hallucinations and delusions” – per Merriam-Webster)

Justine’s sister, Claire, played by Charlotte Gainsbourg, is the Martha to her Mary.  She has organized this large party, and struggles to keep everyone on-task while Justine acts on impulse.  Justine’s mother hates the wedding, but unlike Justine, she doesn’t try to hide behind a smile.  We feel sorry for Justine, but we hate her mother.  Her anger at the world is neither clever or beautiful — just mean.

(There’s not much to say about the men in Melancholia.  They are distracted, impotent and unimportant.)

The marriage falls apart quickly, and the guests are sent home.  Claire tries her best to care for her sister, although Justine cannot bathe herself and cannot eat a meal without sobbing.

The planet – which we learn is named Melancholia – approaches Earth, and we prepare for the inevitable collision.  Some characters try and deny the end, hoping it will pass us by.  Claire’s husband promises her that the “real scientists” say Melancholia is leaving.  He pretends there is nothing to worry about for as long as he can.

As it becomes more clear that The End Really Is Near, Justine grows stronger, and Claire weaker.  Justine’s pain and depression becomes justified — while Claire’s hard work and optimism appears to be, as the Preacher of Ecclesiastes tells us, “vanity and a chasing after wind.”

New York Times critic A.O. Scott compares Melancholia to the parable of the Ant and the Grasshopper — but with the opposite moral of the fable.

Justine faces death head-on, but she’s no brave stoic heroine, or over-woman, like you might have expected from von Trier’s German romanticism and heavy use of Wagner.  Instead, Justine become more like her mother, and less sympathetic as a character.  Justine lashes out in anger at her sister, and at the world that is crumbling.

The idea that pain and anguish are appropriate responses to the world is an idea that runs through all of von Trier’s work.  His apocalypses in Dogville and Manderlay are perhaps more biting than Melancholia‘s.  In those films, the Myshkin-like liberal who attempts to eradicate evil finds that kindness unleashes even more depravity than she realized could even exist.  Von Trier’s films go so far as to endorse Satanism, fascism and slavery in order to remind us of the wickedness embedded in even our most seemingly moral citizens.

All the religious writers worth reading do the same.  And many religious filmmakers have tried to copy them.  Currently, Terrence Malick is the only director who can consistently make suffering as sublime as von Trier can.  But Malick undercuts the pain with too much happiness.  Von Trier stays focused.

His flood has no Noah, his crucifixion has no resurrection, and his Judgment Day has no Lamb.

And, I think this is for the best.  A collection of scripture or a church calendar or a work by Dostoevsky has the length and depth to explore both sin and redemption.  I’m not sure a 2 or 3-hour film can do that.  If we’re offered salvation only hours after having our soul crushed, we haven’t been allowed to experience despair for a meaningful length of time.