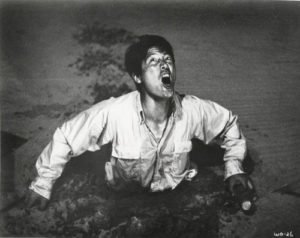 Woman in the Dunes (1964) dir.Hiroshi Teshigahara

The form of Woman in the Dunes is horror, but its soul is a family tragedy. A middle-aged man finds himself trapped in an ever-collapsing home. His wife adores him, and he may love her too, but they cannot help but fight. His heart, even in the blissful moments of home life, is set on escape. He wanted to do something more — be something more — but he seems doomed to be the husband and father that everyone else seems to believe he wants to be.

Arthur Miller’s Death of a Salesman and August Wilson’s Fences fit in here. While the men on their stages struggle against the invisible forces of responsibility and inadequacy, Kobo Abe renders his story’s antagonist physically. The sand pit.

No matter what Niki Junpei does, he cannot escape the sand. The more he struggles upwards, the quicker he is pushed downwards. His persistence, his hard work, lead him nowhere.

And yet, Junpei seems to achieve a sense of peace with his situation. Perhaps the material nature of his enemy provides an exit in a way that Willy Lowman’s and Troy’s enemies cannot.