Chungking Express is one of Hong Kong director Wong Kar-wai’s early films.  It is split into two stories that are unrelated narratively or thematically, but share a common style.

The first concerns a young man who copes with a breakup through denial, jogging and pineapples.  Does his obsession with expiration dates have anything to do with Hong Kong’s then-imminent return to China?  (A later film, 2046, references the date set for the end of Hong Kong’s self-rule.)  He meets a Godardian drug dealer and has a birthday. 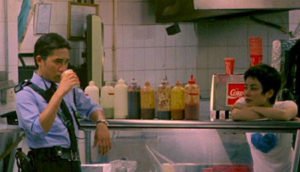 In the second, a counter girl at a restaurant falls for a local cop, and spends her days sneaking into his apartment and messing with stuff.  She is saving up for California, and her love of The Mamas & the Papas’s California Dreamin’ is clever the first time, interesting the second time, tired the seventh time and terribly stupid by the time the movie ends.

It seems as though Wong is still developing his skills, and trying his hand at the New Wave.  Like a college baseball player giving switch-hitting a go, he’s trying to make an art film before he’s entirely an artist.  But it very nearly works, and it puts his talent on display.

Chungking Express has a fast, frenzied pace, with conventions cribbed from early 90’s music videos.  And, as with those videos, it never tries to be anything more than pure style.  Wong has always been popular with hipsters.

This of course, is in contrast to the slow, almost Ozu-paced Wong films of the 21st Century.  The plot doesn’t move quickly in Chungking Express, but the characters do.  There are few shots where no one is running, jumping, yelling or eating.  (Those few shots are the best ones)  Several sequences seem to be edited by a kid whose mother bought him Adobe After Effects before anyone else on the block. But it was the 90s, and that was cool